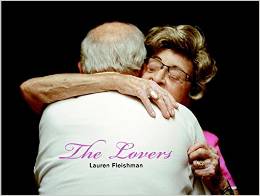 The title of the book, The Lovers, calls to mind passion, intensity and deeply felt emotions. The couples in this book represent emotional depth of a more enduring kind; relationships which have lasted for more than 50 years. After finding a letter which her grandfather had written to her grandmother, the photographer Lauren Fleishman decided to find more couples whose relationships had lasted for 50 years or more. The images are combined with extracts from interviews, presenting the couples’ own words verbatim. The images vary from couples posing for the camera, to shots of the interiors of their houses, to them going for a walk in the mountains.

Of the 55 couples in the book 3 are from France, 2 from Italy, 2 from Turkey, 2 from England, 1 from Sweden, 1 from Scotland, and the remaining 44 are from the United States. This does leave one wondering whether relationships which last a long time are far more prevalent in the US than elsewhere, though I suspect this is more to do with Fleishman being American and thus having easier access to people there. One couple, from Bradford, UK were married in 1925, another American couple in 1938, but most of the couples have been together since the 1940s or 1950s. The snippets from their interviews are telling of the social climate at the time of their marriage, reveal racial tensions, homophobia, using a coin toss to decide who would marry the younger sister.

One of the features of the book is that there are no chapters, and the reader can dip in to any couples’ story in any order. Primarily a photography project, the images are allowed to speak for themselves, which is a strong point of the book though I wanted a greater understanding of these couples’ lives. My desire as a reader/ viewer to want to know more is testament to the fact that Fleishman has chosen a fascinating topic to explore, and in this collection to have tantalises the reader with what seems to be the tip of an enormous iceberg.

Being a study in 50-year relationships, it is also a study of love in older age. This is one of the more fascinating aspects of the book. The way the couples present themselves, and are presented, in their photographs is a fascinating exploration of love and the aging body. Tender moments have been captured – of a wife wiping ice cream of her husband’s face, of a man with his head on his husband’s shoulder, of another who sits with his hand on his wife’s thigh as she knits. The Swedish couple appear on a tennis court; symmetrically posed with their rackets ready to strike a ball. They look youthful, jovial and strong. A couple from New York appear in their bathing suits on a not particularly warm-looking beach, she whispering into his ear. He gazes at the floor while he listens, in their own world Several of the images feature couples kissing, some tenderly, some playfully. Each image is a contemplation on social attitudes to love in older age.

What the book reveals most perhaps is that there is no particular secret to the longevity of these relationships, and that each one takes place in a specific time and place, with its own difficulties to overcome and deeply personal ways of dealing with them. The strategies which these couples adopt to maintain their relationships involve a sense of humour, as Yaakov Shapirstein, who appears in the book with his wife, Maria in their swimsuits on a not very warm looking beach illustrates by saying ‘What is the secret to love? A secret is a secret, and I don’t reveal my secrets’. Another couple Alibey and Esma Kudar, from Turkey say that in their 57-year marriage they have never had an argument. This might be the passing of time putting some perspective on the past, or it may be that over time perhaps couples ideas and wants align, reducing the potential areas for conflict, or as Esther Redliz (p.56) puts it ‘you sleep on one pillow you get one idea’.

Focusing on these long-term relationships, picks them out as special and as such perhaps desirable. Archiving them in this way almost seems to suggest that they are a kind of relationship, which is dying out. Unfalteringly romantic, and often moving, the book is an enjoyable mediation on, to paraphrase Arnold Tenenbaum featured in the book (p.122), people whose lives have been their marriage.

The Lovers, by Lauren Fleishman. 2015. Published by Schilt Publishing, Amsterdam and London.