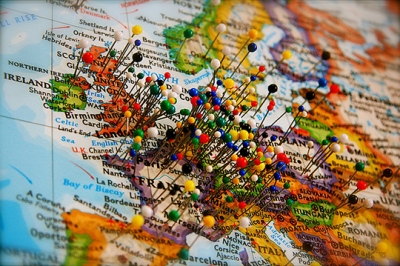 Deciding where to live involves a number of considerations, and when moving means migrating to another country those factors might be things like  which languages are spoken there, and proximity to our families. The importance of these things might alter over the course of an individual’s lifetime. At some points people might prioritise school systems for their young children, at others they might be more interested in job prospects, and sometimes it’s the weather and lifestyle that they are after.

Many of the love migrants I’ve interviewed have felt that they could live pretty much anywhere in Europe. There was no allegiance to any particular city or country; Berlin, Brussels, Barcelona were, as one participant put it, ‘the same, but slightly different’. In terms of culture, while there are certainly local ways of doing things, these don’t seem to have much impact on many of the mobile people I’ve spoken to. Lots of them speak two or more languages, which must help. There also seems to be a strong feeling that, in European cities, so many people speak English, that it is easy to move around within this international, global strata of the migrant community.

And there are times when only matters of the heart are what decides. An interesting restriction which couples are self imposing on where they will or will not move to, is based on their past love relationships. The assertion that they could more or less live in any European city was made by one couple, who also said that Paris was off limits because one of them  had lived there with a previous partner. This, in fact was the only definite limit which they placed on where they could potentially live. They had similar thoughts about choosing which city to get engaged in, as they wanted to find a place which was ‘theirs’. Maria didn’t want their relationship overshadowed by feelings which might linger from other relationships.

I mentioned in a previous post, the importance which place had for one couple. They needed an anonymous, international city like London to be able to foster their relationship. So, whether it is the feeling a relationship has  in a particular place, or if it’s a need to preserve a sense of newness, or to keep the ‘us-ness’ of a place the relationship between place is strong. Love, it seems, is an important force which compels people to move, or stay, and guides them in where they want to go.